The Night I Met Father Christmas – the Tramp 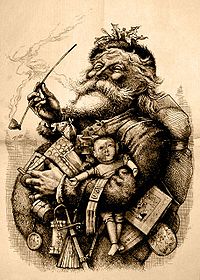 When I was 5 I saw Father Christmas.

I know what you’re already thinking: I saw my parents sneaking into the room and made the mental switch. Fueled by an afternoon of awful Christmas TV, I saw what I wanted to see. The power of suggestion. I was 5 years old!

I’ve heard it all before. With each passing year less and less of the kids at school believed me until finally they made fun of me for it. I learned to smile and admit that I probably had just dreamt the whole thing up. Ashamed of my credulity, I became the world’s most anti-Christmas child. From the age of 10 I refused presents, declared the whole thing to be just an exercise in consumerism. Merry humbug.

It’s not easy to escape Christmas and mention of That Man. His face is on book covers and magazines. He’s acted out in department stores by desperate overweight actors. You can’t buy a shirt or a packet of cornflakes without hearing one of the sickly sweet tunes composed last century that will never quite die. Santa Claus is coming to town – really? Tell him to stop for a photo this time.

There’s no moment more lonely than when everyone else is celebrating and you’re not. Everything is closed, people are singing drunkenly and badly in the streets, and no one bothers to reply to emails. By the 26th I’m drumming my fingers against the table – is it all over yet? can we please get on with things now?

The only thing I like is to walk the streets on Christmas Eve when everyone is busy gaining weight with their families. There’s a short break from the forced cheerfulness of the past fortnight and the town falls quiet. There are hardly any cars on the roads and the only people to be seen are those hurrying to some party full of merry noise and light. Or the odd stray soul who has no one to celebrate with.

It was cold this Christmas Eve. Catching sight of a fire burning in a drum, I joined a couple of homeless guys in warming my hands. People are scared of those who live on the streets, I don’t know why. Maybe because they think they have nothing left to lose. My company was accepted with brief nods from the men who stood there staring into the flames. The man to my right was old with a white beard and a hacking cough. He passed me a bottle of vodka and I took it gratefully. As I passed it back to him, however, I caught his eyes and a five year old boy screamed loudly inside me.

‘You!’ I whispered fiercely.

‘Me – what?’ he grimaced, snatching back the bottle.

‘You calling me a thief?’

‘Oh, right.’ he nodded to himself, relaxing again, ‘Well, that was all long ago.’

‘Then you’re… real.’ I found myself wobbling on my feet as I took in this old bum, dressed in a smelly black coat, covered in dust and shuffling about in worn-out boots. It was him, I didn’t have the slightest doubt – he had that same troubled look around the eyes that I had seen when I had shone my torch on him all those years ago in my bedroom. On that occasion he had muttered something under his breath, climbed out of the open window and was gone before I could scramble out of bed.

‘Just call me Nick.’ he sighed, passing me the bottle again. I clung to the taste of cheap vodka and tried to resolve in my head that watershed moment of childhood when you realise your parents have been lying to you for years. They bought the presents. Period. I felt vaguely absurd standing there with a bottle in my hand, ridiculous questions on my mind. But I had waited years for this moment. I just had to know.

‘Take a drink, kid.’ he insisted, reading the doubt in my face. A hundred queries jumped to my lips and I would have spoken but he waved me down. ‘So you think you saw me. Maybe you did, I don’t know. I got around a lot back then. But that’s all in the past now – look around you, Christmas does just fine without me.’

‘What about the presents?’ I insisted desperately, evoking the essential flaw in his entire myth.

‘Your parents bought them, stupid.’ he sneered. ‘How would I carry enough for everyone? In a sleigh? How would I make them all for free? You think I have, what, elves working in a sweatshop somewhere?’

He shrugged. “Giving.’ I was about to object but he began to cough and didn’t stop for two minutes. It sounds like tiny pieces of his lungs were shaking themselves loose. When he had recovered he took back the vodka and gave another heavy sigh.

‘You probably think you know what I”m going to say. That it wasn’t about the presents. That people got stuck on the material stuff and forgot the spirit behind it. Well, that’s a load of crap. The kind of message you can stick up on the wall of your bathroom along with all your other little homilies.

‘It was people looking for the one behind the gifts that did my head in. Little kids, like you, sat awake for hours with torches hidden under their blankets trying to catch me out. Writing me lists accompanied with promises and vague threats. Like underage lobbyists. And don’t even get me started on the movies and the songs.’ he scowled, shaking his head and stretching out a hand towards the fire.

‘Then…what were you giving?’

He looked up at me sharply. ‘Gratitude.’ he said, making a mock sprinkling gesture with his hands. ‘For everything you have and are too dumb to realise it. You know why everyone’s so miserable? Because they think happiness is given to them by other people. Then they hold onto them until they choke all the life out and move onto the next one.’ He passed the bottle over to the other tramp who took it without a word. Then, buttoning up his coat, he made as if to leave but turned one more time.

‘Go home. Call someone you love. Whatever. There’s only one gift, kid,’ he said, leaning in and slapping me lightly on the cheek, ‘And that’s the moment you’re living. That’s why they call it the present.’ Then he stumbled off across the square beneath a light rain that had begun to fall. Before he crossed the road he turned and laughed, ‘And yeah, I read that on a bathroom wall somewhere.’

I never saw him again. Maybe you don’t think I ever did. I saw what I wanted to see. The power of suggestion.

I’ve heard it all before.