The Man Who Fell in Love With the Moon 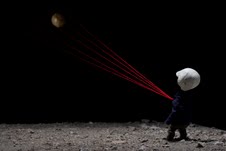 Of all the stories of broken-hearted lovers, none was ever quite so tragic as the man who fell in love with the moon.

It all began in the park one evening as he sat on a bench, shrouded in self-pity, staring at his cell phone in despair. His girlfriend had just dumped him – by SMS – and he felt all alone in the world. He no longer cared what happened to him now that there was nothing on earth for him to live for but… wait! Who was that in the Western sky, curled up above the horizon with a shy silver smile?

And in that moment – moonstruck – he knew he would never love anyone but her again.

She soon retired for an early night, being but a young thing and her admirer stretched out on the bench where he was, staring up at the sky in sheer gratitude, hoping beyond hope that she came there often.

He passed the next day with his nerves on edge until around sunset he saw her again, a little higher in the sky this time – and she how she had grown in a single day! When the fat old sun in the West flopped over the edge of the horizon, the moon gracefully followed, too young to stay up late.

Over the next few nights she began to mature into womanhood, staying out for longer after dark and when the man courted her by the pond in the park, small shoals of moonfish swam to the surface to feed on her light.

With each passing night she grew brighter and brighter until her radiance banished the smaller stars from the sky. Finally, on the 14th night the man could hold back no more. He awaited her entrance at the eastern horizon anxiously and as she rose majestically into the sky he thought he would go mad with love. He danced and sang to her all night, even climbing the trees to be closer to her, but still the moon drifted across the sky without paying him any mind. Was it possible that he would be rejected again?

The next evening she was late to arrive and he wondered if she might have moved on to other skies. But then she rose again from the east, seeming to struggle against the jealous pull of gravity until she broke free and began her journey across the night. Again the man howled declarations of eternal love until his throat was hoarse. He begged for a single word of kindness from her, a sign that she would accept his devotion but she seemed not to hear and continued her way calmly.

The following night the moon arrived even later and he noticed that she seemed to have lost some weight. She seemed thinner around the edges, no doubt due to the long distances she had been traveling but still he worried for her health. Night by night she became thinner and thinner, losing her healthy shine as though she were being eaten away by an illness of the heart. He dragged a doctor to the park at 3am to see what could be done but the medic just shook his head and wrote him a prescription for a sedative.

Nothing it seemed could be done. The man kept a solemn vigil, staying awake each night and late into the mornings, his beloved these days unable to even make it across the sky, so thin and tired had she become. At last came the day he had known in his heart would arrive, the night when she didn’t come at all.

He couldn’t bring himself to move from his bench and sat there weeping feverishly through the days and nights, surviving only on the coffee and bread that kindhearted passers by brought him. He stared at the pond and wondered whether he should end it all for what was life without her? He had more or less made up his mind to throw himself in when… there! – in the Western sky – he had to wipe his eyes and pinch himself to be sure, there she was once again, a new-born babe with a bright innocent smile.

As the sun’s rays filtered through the branches the next morning, the man suddenly understood. She was probably too shy to make such a public love affair here in the town. He laughed as he wondered why he hadn’t thought of it before and drove out to the desert where they could get some privacy at last.

Alone at last, surrounded by nothing but dust and cactus, the man watched his love grow each night, now more beautiful than ever without the distracting lights of the city, each day assuming greater possession over the reign of the dark heavens. And when she reached maturity on the 14th night he once again sang out loud his love to her, dedicating his life, his heart, his soul, he was hers for the taking. And again she made no sign that she had heard and towards the western horizon, the hounds of dawn hot on her trail.

And though she was now far from the polluting influences of the city, still she was struck by the same wasting illness as before and again her admirer went through untold agonies on the earth, watching her fade away. Months passed by in an endless cycle of passion and despair and the lover of the moon could take it no more. He wanted to have her, to hold her, to possess her love all for himself. And finally, he came up with a plan.

On the 14th night of his 7th month of courtship, he waited until his love was at the peak of her beauty and withdrew a long knife which he then plunged deep into his chest. Withdrawing the blade with a little piece of his heart on the end of it, he threaded it around a fishing hook and line and cast it high up in the sky to the left of the moon. A hungry star swallowed it at once. He plunged the knife in again to take another piece of bait and cast his line out to the far right of his love where another star wasted no time in biting hard. He cast out five lines this way and tied the ends around his bleeding heart and fainted, overcome with the effort.

The moon, having taken center stage of the night, began her song of departure, drifting across the sky and downward to her bed in the west as always but on this night found her way blocked by a kind of net. She was caught like in this web stained with the blood of a lover’s heart and could not break through. The sun came up some hours later and she winced before the merciless brightness of his light and scorched by his heat as he passed close by.

She passed several days of this torment before she shook herself free awake from the dream of birth, decline and rebirth that she had lived for millions of years. Held motionless in the sky, her magic began to fade and her light became more dull each night. She looked up and saw that the stars were holding her in place.

“Why are you holding me prisoner like this?” she asked reproachfully.

“Don’t blame us!” the stars cried, “We also want to move on but we’re stuck too!”

The moon looked down and saw for the first time her lover and perceived at once his total desperation and how much he had sacrificed for her. His passion so great that her light had filled his soul almost entirely and there was very little of him left. She told the stars to all pull together and they slowly lifted up the barely conscious man through the sky, swaying through the air and then out into the space, setting him down gently on the surface of the moon. With a sob the man cut the lines and threw himself upon the object of his heart’s desire.

“Please forgive me!” he begged.

“If you had held me there for much longer I would have died forever,” the moon replied gently, “My light is for everyone and cannot be owned by any one person, however in love they may be.

“But stay, ride with me now and sing to me during the dark passages when even my heart grows afraid. It will be a comfort.”

And so ends our story of desperate love. But if, on a clear night, you hear snatches of song from far away up above, look closely and you just might see the man in the moon.