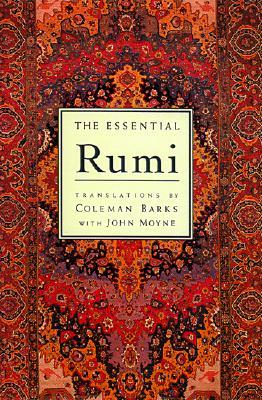 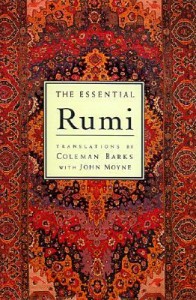 The Essential Rumi from Coleman Barks

These are a few of my favourite stories from the luminous Sufi poet, Rumi, a Persian mystic of the 13th century.

Trust God But Tie Your Camel

There was once a man who was on his way back home from market with his camel and, as he’d had a good day, he decided to stop at a mosque along the road and offer his thanks to God.

He left his camel outside and went in with his prayer mat and spent several hours offering thanks to Allah, praying and promising that he’d be a good Muslim in the future, help the poor and be an upstanding pillar of his community.

When he emerged it was already dark and lo and behold – his camel was gone!
He immediately flew into a violent temper and shook his fist at the sky, yelling:

“You traitor, Allah! How could you do this to me? I put all my trust in you and then you go and stab me in the back like this!”

A passing sufi dervish heard the man yelling and chuckled to himself.

There was once a successful businessman who had everything – a beautiful wife, adorable children and a big house in which they all lived happily. The pride of his life though was his exotic songbird which he kept in a cage and fed delicious titbits when it entertained his guests.

One day the man had to go on a journey far to the south and he asked his wife and children what presents they would like from abroad – they asked for fine silks, honeycomb and clockwork toys. Finally he asked his songbird if he would like him to bring anything back.

“I wish only for one small favour.” The songbird replied.

“Anything!” his master declared.

“Just this – when you see my cousins in the trees in the place you’re going to, please tell them about my conditions here.”

“Are you sure? I could bring you back a fine jewel-encrusted mirror or dried tropical fruit?”

“No, just this, thank you.” The songbird replied and the man went away feeling a little disconcerted but resolved to carry out his pet’s wishes.

The man made his trip safely and carried out his business to satisfaction and spent his remaining time there buying the presents his family had requested. Finally, he went to a park and saw some birds in the trees that bore a remarkable resemblance to his own songbird. He called up to one of them and told them about how his own bird lived in cage and sang for him.

But no sooner had he finished speaking than one of these exotic birds trembled on its perch and tumbled to the ground and ceased to move. The man held his head in grief and the incident quite spoiled his trip.

He returned home and greeted his wife and family who were delighted at their presents but he couldn’t share their pleasure as long as the forthcoming encounter with his songbird remained on his conscience. Finally he found the courage to go down to the garden.

“Well?” his songbird asked and, hesitantly, the man told him exactly what had happened. The song bird listened intently, then trembled on his perch and fell to the bottom of his cage, dead.

The man was now beside himself with grief and confusion. Weeping openly, he opened the door of the cage and carried out his beloved songbird in his hands. No sooner had he done so, however, the songbird returned to life and flew up to the branches of the nearest tree and let out a shrill of joy at finding its freedom.

The man scratched his head in wonder and eventually asked:

“Okay, you win. But tell me please, what was in the message that contained this trick?”

The songbird looked down at him with pity and said:

“My cousin in Africa showed me that it was my beauty that kept me in the cage. Were it not for the delight of my singing voice you would have lost interest long ago. I had to give up that life in order to become free.”

[The image of dying unto oneself is a common Sufi theme, in particular dying unto this world and the things that we hold precious in order to experience the true freedom of living in grace. In one sense this story is about the self-limitaion of vanity but at a deeper level there’s the notion that as long as we’re in love with ourselves we will always be in a cage of our own making.]

The Heart Donkey
There was a man in Turkey who was travelling with his favourite donkey, a faithful companion for years and an animal very close to his heart. At the end of a hard day on the road he came to an inn and decided to rest there for the night. No sooner than he had taken off the saddle bags than a youth working for the inn came out to greet him.

“Salaam Aleikum, sir, welcome to our humble shelter! Please, come inside and get some warm soup and sit beside the fire.”

“Of course, I’d love to but first I must make sure my donkey is well cared for.” The man said, patting his donkey on the back. The youth smiled generously.

“Please, sir, allow me to attend to such details, you are an honoured guest here.”

“But it’s just that he’s an old donkey and needs a nice bed of hay to lie in.”

“Sir, we guarantee you the best care possible.”

“But you will sweep the floor first to make sure there are no stones? He gets in a terrible mood if he doesn’t sleep well.”

“Please, sir, just trust me, we are professionals here.”

“But you will add some water to his straw – his teeth are getting shakey and he likes just a little fresh grass to begin with.”

“Sir, you are embarrassing me!

“And you will give him a little rubdown along the spine – he goes crazy for that!”

“Sir, please just leave everything to me.”

So finally the man gave in and entered the establishment to enjoy a fine dinner by the fire and a comfortable bed. Meanwhile the youth rolled his eyes and… then went out to play cards in a nearby den.

The man could not sleep somehow, despite the silk sheets, as he kept having nightmares of his donkey chained up without water or food, lying on the cold stone. The vision wouldn’t leave him and so he got up in his dressing gown, walked down the steps to the stable and there! His donkey was in exactly the condition he’d imagined – cold, hungry and dying of thirst.

[Rumi then sums up by saying: the world is full of those who say whatever is necessary to get their way. When it comes to looking after your heart donkey, it’s entirely up to us. We are the only real keepers of our feelings and no one knows better than us what we really need, hence the value of trusting our intuition and taking care of our hearts as though it really were an old, faithful companion.]