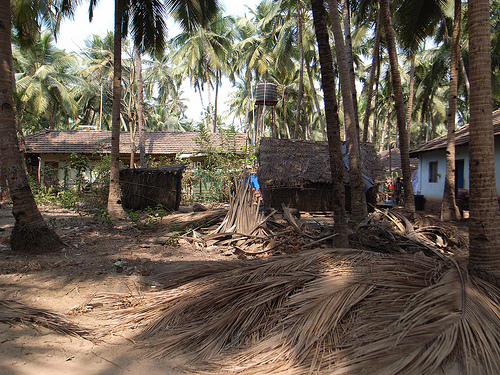 [Excerpt from Tales of a Road Junky ]

Goa in 1995 had already passed its heyday as the Mecca of trance parties and the tens of thousands of foreigners looking to dance the night away to repetitive beats had stirred the greed of the local police and mafia. The season I arrived the police and politicians were haggling so hard as to who was going to make the most money out of the techno-coloured hippies that there were hardly any parties at all.

All night partiers from all around the world drove around on their motorbikes pursuing the rumour of a party. Like Pooh Bear following his own tracks, everyone drove after other freaks dressed up in fluoro, convinced that they must know where the party was. Often the taxi-bike boys would start the rumour of a party just to get some business and I spent the odd night wandering for hours in the dark, pressing my ear against the wind in the vain hope I’d hear a tell-tale rumble of a bass somewhere up the hill.

But though I was anxious to get my fair share of high times, that first season I was just happy to be in Goa at all. I spent my days wandering around between milkshake spots, high only on the ambience of the place. The roads were strips of concrete that split a course through the gleaming rice paddies under a looming tropical sky. Everyone bombed around on motorbikes and the hundreds of potholes, cows, dogs, trucks and other stoned freaks on scooters made just getting from one beach to another a trip in more ways than one. There wasn’t a cafe where someone didn’t come limping in with a bandage around their ankle, often from the exhaust pipe of an Enfield and it was well known that if you got into a serious accident no one would take you to hospital. The quirks of Indian law made them responsible for you if they did.

I was far too scared to drive and prayed to all the gods I knew when I accepted a lift on the back of someone else’s bike. In any case, the Goans lived so slowly that it didn’t make any sense to me to buzz around at high speed. It was walking around that I found the real juice, the hidden character of Goan life. I was happiest picking out trails between the palm trees and the bushes that led to discreet cafes, places that you would never have found if someone hadn’t taken you there. The Portuguese houses in the jungle looked like they were under water; smoky red roofs overhanging the white walls and a long, shady veranda that was the soul of the house. The houses seemed to form part of the organic ambience of the jungle and you could walk past a place without even noticing it.

Yet you could also get a sixth sense of when a house was coming up. First you’d see a shelter where the family stored fallen branches of the palm trees for fuel when they cooked their rice in the late afternoon. Then there would be the outside toilet – a concrete shed with a bucket of water and a chute leading down to the ground behind. There awaited the local pigs who ate the shit. Every now and then you’d hear the scream of someone newly-arrived who hadn’t expected to see the snout of a pig at such close quarters.

There were always clothes hanging out to dry, of course, and probably a couple of motorbikes standing at ease. You could tell how many of the family were at home by the number of flip flops out on the veranda and perhaps you’d even realise that an old grandma was sitting there all the time, watching you closely. Mothers unleashed chemical warfare on the jungle by frying chillies on open fires and left you choking and unable to breathe. At night the family dogs barked themselves to three times their size but didn’t scare you as much as the wails of the crazed great-aunts locked away in the back room like living ghosts.

Pass by a Goan house in the evening and you’d hear them praying as though they were practicing their own funeral rites; a morose chorus of murmured lines from the Bible to remind them of their sinful Catholic souls. The families continued with their conservative, traditional lives, pretending for all the world that the mayhem of the freak scene wasn’t happening. Truth be told, though, we gave them company as the Goans kept themselves to themselves, old grudges lying like invisible fault lines of silence through the community. 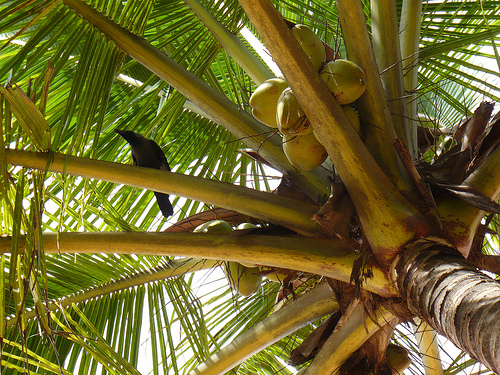 Emerging from the bush you could still find shade in the groves of the palm trees that grew close to the beach. Gangs of crows swore at one another in the branches above and you didn’t put it past them for a moment to drop a coconut on your head. Everyone had a story about the coconut that had almost killed them and you knew there was one up there with your name on it. A walk through the palm trees on a windy day could be quite a Zen experience.

The resident characters that really made the ambience in Goa were the animals. There were vagabond cows who ate the flowers off roadside shrines to Maria and who chased you for your bananas on the beach. Sometimes the beach dogs would hassle them and they’d break into a run, sending people diving out of the way.

The beach dogs themselves were a motley crew of canines in varying degrees of health. Some of them were mangy beyond hope and they gave birth to pitiful batches of puppies that would never survive the rainy season. One night I was tripping with a friend on the beach, staring at images of Shiva dancing in the moonlight on the waves. We slowly became aware of a paw that had landed on each of our shoulders as one of the mongrels had come to pay homage, too.

The snakes were an abstract concept until you actually saw one. After that you didn’t walk barefoot at night any more. A snake bite could cripple you for life or even kill and so it was a good plan to stamp your feet as you walked and use a torch to see the small ones that were too slow to get out of the way. One season I was too poor for a torch or even sandals and it was only the Gods who guided my feet to tread in safe places.

I ended up believing in everything in India.