The Story of the Wishing Well 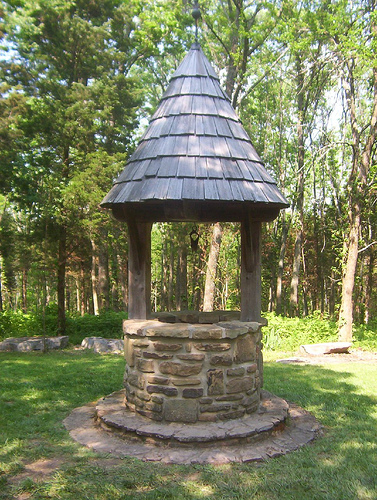 Before the world was mapped there were many more places you could go. The only borders were the natural ones – impassable mountains, violent oceans, treacherous swamps and… the limits of your imagination.

These days, of course, we live in a world that has been mapped and measured, examined and explained. We know where everything is, how long it’s been there and how long it will last.

But it was not always so. Once – and it may well still be true for those with particularly strong imaginations – you had only to dream of a place to be sure that it existed somewhere. The world was but a mirror of your mind.

One such place was the Wishing Well. It didn’t look like anything special, just an ordinary stone well with a wooden bucket in the middle of a field. But drop the bucket down into the Wishing Well and it came up full, frothing and bubbling with your deepest desire. Childless women came to the Well and pulled up a bucket with a new born babe inside and many were the musicians and philosophers who came to drink deeply of a draught of Inspiration.

But though few saw it in their excitement of finding the Well, a carved on the rim of the stone well were six word of warnings; an old curse.

May all your wishes be granted 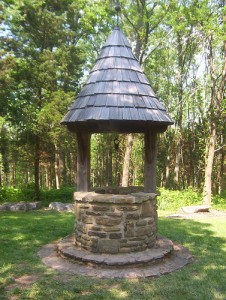 Take those who came seeking riches, for instance – pulling up a bucket of gold they discovered their treasure was too heavy to carry. Their skeletons were sometimes found resting upon their riches, teethmarks left behind on their gold coins.

The brokenhearted, too, came to the Wishing Well, desiring only to forget. But after drinking deep from the Well, they forgot not only the name of their Beloved but also their names, origins and professions, condemned to wander the world for the rest of their lives like aimless ghosts.

It was said that the Wishing Well was only ever found by those who believed they would find it. No sooner had they emptied the bucket of their wishes then the Well would vanish and reappear somewhere else.

So it was perhaps ironic that the last person to find the Wishing Well was one of the rare souls who wanted nothing at all. His home was wherever he lay his head to sleep that night and, owning no more than the clothes on his back, he was grateful that he had nothing to carry. His friends were the people he happened to meet as he walked the earth and he traveled wherever the winds blew him – until one day when a mischievous gust nudged him into a large open field with a stone well in the middle.

It was a hot day so he walked up to the well to slake his thirst and lowered the bucket to pull himself a drink of water. The rope seemed creaky and reluctant though and when it came up too light to have filled, he expected to find holes in the bottom of the bucket. Instead there was a folded note. Opening it he read:

Scratching his head he suddenly saw the words carved into the stone rim and all at once he understood where he was and broke into hearty laughter. What on earth could he wish for? He needed new shoes, it was true – but the ones he wore were so comfy now that his feet were used to them. He could do with something to eat but he was willing to bet there were berries in season in the forest. He briefly considered asking for a new razor as the one he had was going quite rusty – but it seemed a waste of a wish and he rather fancied himself with a beard anyway.

It struck him as a little sad that so many people would have given their little finger to be where he stood and yet he couldn’t think what to wish for. Then inspiration struck and he lowered the bucket, chuckling as he dunked it in the water below and pulled up a load of…dynamite. Striking a match on the stubble of his chin, he lit the fuse and, as he let the bucket fall, he ran away as fast as his legs would carry him.

A loud explosion from behind sent him sprawling flat on his face and suddenly the air filled with a cacophony of sound; elephants blowing their trumpets mixed with the sound of roaring locomotives and a New Orleans jazz band. He raised his head to see all the water from the Well shooting up in the air in an impossible collage of images – flamingos performed ballet upon the back of an enormous sunburned whale, polar bears kissed passionately in tuxedos and telephone boxes argued furiously about whether there was such a thing as free will…

And then it was all gone. The water of the Wishing Well evaporated into the sky and mingled with the clouds. A sharp breeze came along and in no time the clouds were dispersed far and wide across the planet.

Which is why, if you ever want a wish to come true, all you have to do is take a walk in the rain, stick out your tongue and maybe, just maybe, you’ll catch a drop from the Wishing Well.

« Previous post
The Magician
Next post »
The Story of Joshua Norton I, Emperor of the United States